As we celebrate Father’s Day this month, we want to share all about the amazing dads we have at Free Mom Hugs who are sharing the message of unconditional love right along with our volunteers and chapter leaders. Free Mom Hugs is for all family members and is never a role that is meant to be exclusive. Having an accepting father can be crucial.  Especially for those who have experienced being misunderstood or have been rejected. Some may have experienced the loss of their father before they came out and just need to experience a proud dad. Having parental support has proven to be life saving.(40% reduced suicide rate: The Trevor Project).  We have seen the beauty and the power of that support. There’s a great feeling of comfort when a parent accepts and celebrates you, regardless of roles society places on us. But there can be different nuances to receiving a hug from a mom compared to a hug from a dad.  We may not even be able to put words to that difference, as subtle as it may be, but we know it is priceless. We are so proud of our Dads who invest their time and volunteer to give hugs with Free Mom Hugs. 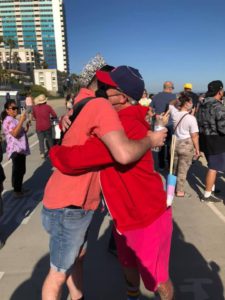 We have asked some of our Southern California dads to share their thoughts and experiences with us. Greg Dunbar has this to say about his reasons for being apart of the Free Mom Hugs movement:

Two years ago this month, my partner and I attended our first Free Mom Hugs event. We were off to LA Pride, in West Hollywood, California. I remember thinking that this was probably a one time hugging opportunity. I wondered how many people would want hugs, especially from a first timer, like me. The day began when we met up with Valencia, our lead for this event. Once she gave us some guidelines, and stickers, off we went. Little did I know that on this sunny, 85 degree day, I was about to participate in the Super Bowl of hugging. I started off by dancing while I stood waiting. I’d wave, I’d smile, and I’d offer a hug. At the time, I felt this would make me seem more approachable. As people filtered in, the hugs started happening. That first handful of hugs was eye opening for me, I witnessed joy, and pain, and I felt humbled. One particular exchange with a young person that day has stayed with me. She was hesitant to accept a hug from me, I didn’t push her. Her partner was persistent, and in a gentle, loving way she encouraged her to accept a dad hug from me. She gave in, and came to me for a hug. I could tell she was holding back a bit, almost as if she couldn’t be vulnerable. Her and her partner were so sweet, they went on their way, and I went back to offering dad hugs. As the day wound down, and we were preparing to wrap things up, that same sweet couple approached us. They thanked us for the hugs, and I told them that it was my pleasure, and that’s exactly what I’m here for. The young woman then told me that she had not had a hug from her dad since she came out, 10 years ago.My heart sank. I asked her if I could give her another hug. She said, yes, please. As I hugged her I felt her let go. It almost feels like an emotional release when someone does this. By the end of the hug, she was in tears, and so was I. That day, I learned so much. One thing I learned is that you never know whose dad is absent. It could be that young person at LA Pride, or the trans kid in Palm Springs, and sometimes, it’s a young woman in the produce department when you’re shopping. I now know that it’s not just about mom hugs. Dad hugs are important because there are so many people who have been rejected, or neglected by their own dads. I want these dads to know that they’re missing out.  And I want the recipients of my hugs to know that my arms are always open for you. This is why I’m a part of Free Mom Hugs.

Rick Menjivar shares his experience as a hugging dad and the beauty of one memorable hug:

I will forever remember my first Free Dad Hug!! We went to our first pride decked out with our FMH gear and were happy to be there. As we walked through the streets a young Hispanic woman approached me and asked me for a DAD hug! My first hug I thought!! I was happy to spread my arms and give her a hug. No problem! I have this! Easy peazy I thought! We both opened our arms and embraced. 10 seconds, 20 seconds at 30 seconds I felt her tears on my shoulder! Then she said thank you and we both embraced tighter! Thank you so much, my father won’t hug me anymore!At this point I am sure she felt my tears on her shoulder. I left that hug with tears, sadness, anger and unbelief that someone would not love their own child. That one hug I think of often.
I can close my eyes and see her lovely face though I haven’t seen her since that day. That was a powerful embrace that touched my very soul. She made an impact in my life with a single embrace. I learned a valuable lesson from that young lady day: Dad hugs are important and powerful as well. Every hug that I give I think of her!
Today my wife and I stand as parents, sometimes as surrogate parents but we are full of unconditional love. We stand as Allies for those that aren’t loved by their parents and family. We stand and fight next to them for their equality and human rights. We stand with them and tell them we love and are proud of them.
We stand with other moms, dads and family to show them they have a family.
#LOVEONEANOTHER

Rodney Foster, was recently on the Today show with his wife Valencia for the Pride segment regarding families with LGBTQ+ kids. They have been a tremendous force in our Free Mom Hugs California chapter and he has this to say about his journey to being a Dad Hugger:

I am told that a dad’s hug feels like a pure expression of love. This is whether the LGBTQIA+ person was accepted or rejected by their family.  I am a hugger by nature. I enjoy it. It is also a physical expression of care, support, and comfort. I mean a good hug; an embrace. I did not grow up hugging. My mother was not a hugger. What she taught was how to love deeply and authentically and to show it through actions. She always protected me. As an adult I hugged those close to me, my girlfriend, buddies and later my wife and children. It felt good to combine the concept of Love with an act of Love. When I see a FMH mom hugging a member of the LGBTQI+ community it reminds me of my mother. Not the hug but that I am witnessing an act of love, support, protection and defiance. It says to the LGBTQIA+ person that “I love you, support you and protect you against those who would harm you because of who you love. You are perfect the way you are.” Do not mess with a mama bear’s cub, there are consequences.

We are so grateful to these dads for sharing their stories and time to give hugs. They are a prime example that Free Mom Hugs is an organization for everyone. The pride of a dad is just as important as a moms.  We see how powerful they are to those who have been rejected or for those who didn’t come out before their dad passed away. These dads are a tremendous example who put their children first and we value their courage and vulnerability. And as Rodney said, “sometimes these hugs are an act of defiance.” For the LGBTQIA+ person, they are defying all those who say they don’t deserve to be hugged. And for the hugger…it’s an act of defiance against a society that tells them they should reject the LGBTQIA+ community. That is why at Free Mom Hugs, we love to defy the world by causing some good trouble and celebrate our LGBTQIA+ communities.

If you would like to join us by becoming a volunteer, support our work or buy a Free Dad Hugs t-shirt at our online store, visit our website at Freemomhugs.org .